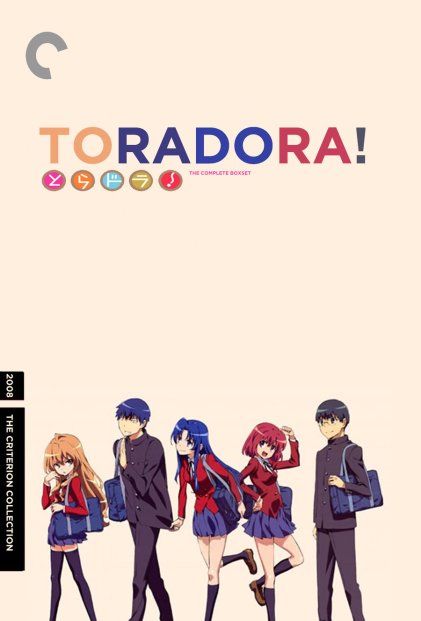 Toradora! first aired between late 2008 to early 2009. The plot focuses on Ryūji Takasu, a kind, gentle and clean young man, to his dismay everyone assumes that he is a complete thug because of his aggressive appearance. To his good fortune, he is placed in the same class as his best friend  Yūsaku Kitamura and his long time crush Minori Kushieda. Early during his first day, he comes into contact with the schools most feared top dog, Taiga Aisaka (AKA The Palm Top Tiger) and coincidentally happens to be Minori’s best friend. She instantly takes to disliking Riūji, however to Riūji’s dismay it turns out that taiga’s apartment faces Riūji’s balcony. Ryūji learns that Taiga has a crush on Yūsaku, and she learns that Ryūji likes Minori. The two agree to a pack that they will aid each other in their pursuit of love.

My Review: I had heard this anime received a lot of praise and so I decided to give it a go and I must say that most of that praise is well deserved. For the most part, the story is really good with some interesting twist and turns that always keep the goings on fresh, however, like most romance anime’s the ending is a make or break situation, and for me, I found that it was a real let down. One thing that these anime does well is creating strong emotional moments that pull the viewer into the moment, all of these moments pull on the heart strings and leave us feeling quite distraught. Besides the heavy hitting emotional stuff the are also quite a few fun moments which really help to strengthen the emotions during the serious parts.